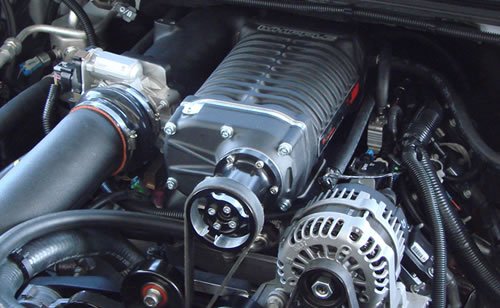 Since 1988, Whipple Superchargers have been the pioneers and leaders of twin-screw
supercharging. Whipple was the first to bring positive displacement technology
to fuel injected, emissions legal GM applications. With over 21 years of GM
supercharging experience, Whipple’s team have now engineered the most
powerful intercooled twin-screw SC system available today for your LS engines.
With all the latest technology, the all new Whipple system makes more power
(up to 275hp more) than any other positive displacement supercharger system
on the market giving you tire frying, neck whipping power that will give you
a grin from ear to ear. The new Whipple system is 100% complete and is designed
for stock engines but has enough capability to work with heavily modified engines.