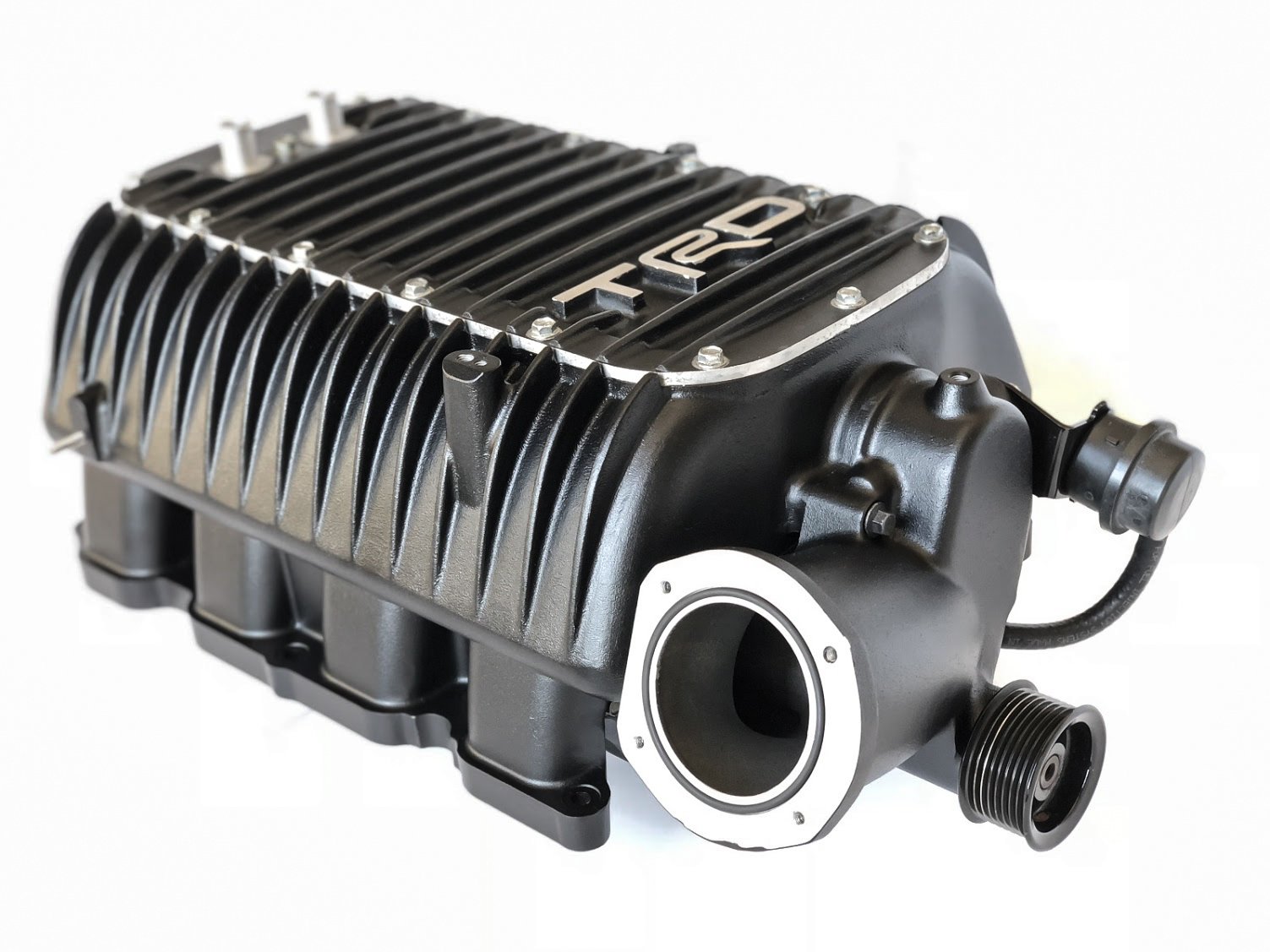 This Tundra supercharger has been remanufactured and completely overhauled to Eaton and TRD specifications. We clean and disassemble each supercharger, replace all seals, bearings, and rotors with genuine Eaton parts. The supercharger is then tested using the same procedure and test equipment as the original manufacturer. Each supercharger comes complete as a kit with a new fitment kit (sometimes called the Box 2), that includes the front mount intercooler, intercooler pump, hoses, fittings, belts and everything you will need to install this in your Toyota Tundra.

About the TRD Supercharger for the Toyota Tundra

This remanufactured TRD Supercharger is now available for the 2009-2018 Toyota Tundra 5.7L V8.  The Tundra Supercharger System makes an amazing 504hp and 550lb-ft of serious truck torque at the crank. The supercharger system is a positive displacement, roots style pump, utilizing Eaton’s lightweight, four-lobe 160 degree twisted rotors. Cast and assembled as a single, OEM-style-manifold and rotating group housing, the unit is quiet, compact, attractive, easy to install, and requires little to no extra maintenance to the unit itself. The positive displacement supercharger offers power instantly as the throttle is pressed. Boost pressure builds with no perceived lag commonly associated with other types of forced induction, and provides a large increase in torque across the entire power band. Throttle control is linear and predictable and makes for an excellent driving experience both in daily driving and wide-open acceleration. Since the supercharger does not compress air as it moves through the rotors, it’s extremely efficient during light throttle and cruising situations. Unlike screw-type positive displacement superchargers that are always compressing, the TVS unit can internally bypass unwanted air, resulting in negligible parasitic loss during cruising and therefore far greater fuel economy. The single cast unit and appropriately sized rotating group eliminates potential leak points and allows for a slim, compact design without sacrificing key airflow design characteristics. The unit features a high velocity flow path through the supercharger rotors and an unrestricted discharge port into the appropriately sized plenum. The large plenum equalizes flow across all ports as air feeds evenly through the low-pressure-drop, dual internal air-to-water charge air coolers. Finally, the ports are separated into individual runners, offering greater operation by eliminating cross-fire. Internally the large charge air cooler features a louvered fin design, which minimizes pressure drop while achieving excellent cooling effectiveness. The extruded multi-rib tubing maximizes heat extraction to be carried away through the large bore coolant re-circulation lines. Externally, supercharger coolant is pumped through a large front mounted low temperature radiator where it’s cooled and circulated back through the charger again.
Features