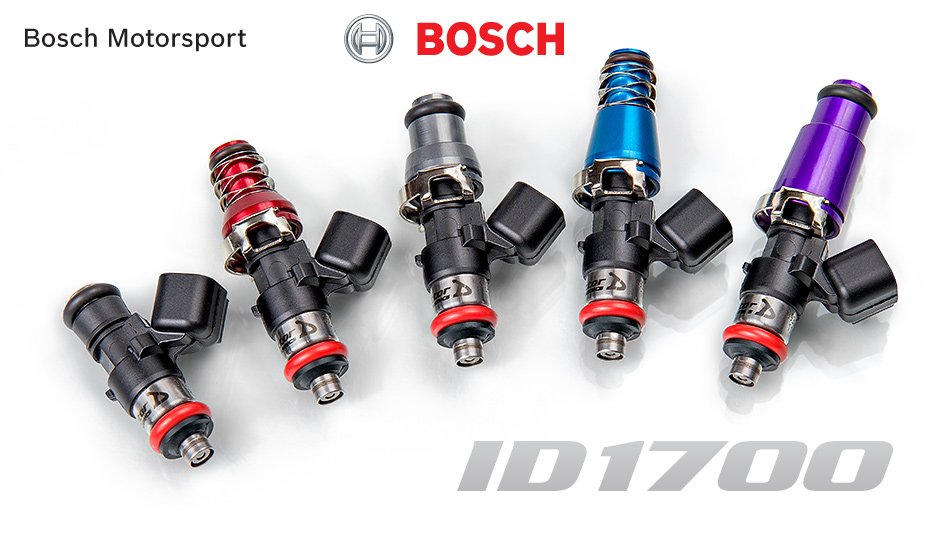 The ID1700 is the most recent offering from the partnership of Injector Dynamics and Bosch Motorsport. The ID1700 was designed to fill the gap between the ID1300 and the ID2000, and like the ID1300, it features corrosion resistant internals making it compatible with all known automotive fuels.
A unique magnetic circuit, resulting from a lengthy development program, makes the ID1700 immune to voltage and pressure sensitivity problems that plague other high impedance high flow injectors. The ID1700 excels at high pressures typical of current automotive systems, and will perform flawlessly in these applications.

The ID1700 was designed to be an all fuel compatible injector, capable of very high flow rates. As such, it will most often be used to deliver E85 to boosted engines, or occasionally, gasoline in extreme high horsepower applications. Neither of these applications requires extended linearity at low flow rates, and so this was given a proportionately lower priority during the design process.

The ID1700 will deliver flawless stoichiometric idle and cruise mixtures on E85, but like the ID2000, should not be expected to do so on gasoline.

If you need flawless drivability on gasoline, the ID1300 will provide this, and is capable of approximately 150hp per injector on E85.

All applications with an asterisk after the part number are incompatible with the stock ECU due to scaling limits.
(Unless Lund Racing is tuning your car…)