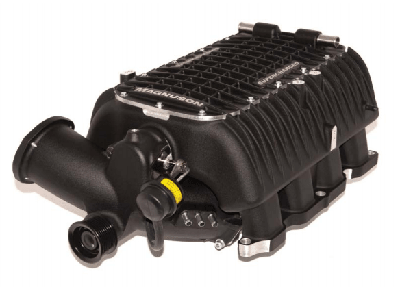 This article is a step-by-step guide from our friends at Magnuson Superchargers on how to replace the coupler in your Toyota Tundra 5.7L supercharger. If you have a Magnuson or TRD supercharger for the 5.7L V8 (3UR-FE), this will guide you through removing the drive cover and replacing the coupler.

This kit from SCOL includes everything you need to replace the coupler:

The coupler is the first thing we suggest changing if your Tundra supercharger is growling or rattling at idle, but it goes away or smooths out with RPMs.

You can also download a printable version of these instructions here:

Any reference to the left or right side of the vehicle is given from the driver’s seat perspective.

We recommend you read this manual completely before starting this job to familiarize yourself with all the tools needed, and the work involved. Ensure that the vehicle has had time to cool down before proceeding with the coupler replacement. 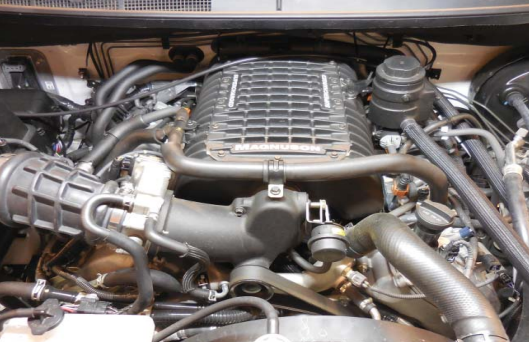 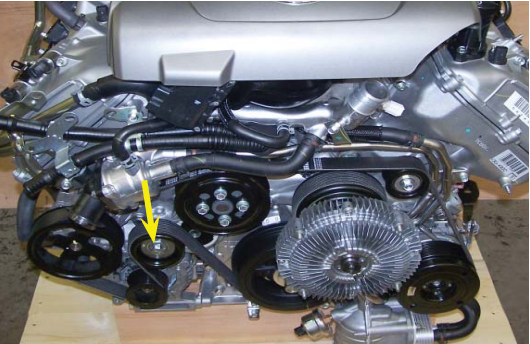 Rotate the belt tensioner clockwise with a socket, and breaker bar to release the tension.

Remove the belt at the supercharger pulley. You may need an assistant to remove the belt while you rotate the tensioner. Check the condition of the serpentine belt and replace if necessary. (Dayco #5081125)

Remove the two hose clamps holding the air duct in place shown with arrows in this photo.

Disconnect the air duct from the throttle body, and the air box. The air duct will remain in this position with the other hoses connected.

Remove the four bolts holding the throttle body in place.

Move the throttle body aside as shown with all the hoses connected. Check the O-ring at the mounting surface for damage and replace as necessary.

Loosen the four bolts (2 on each side) holding the fuel rails in place. One of these bolt locations is shown with a red arrow in this image.
Note: The bolts need to be deep enough so that they prevent the spacers from lifting out of the grooves, but loose enough so the rails can pivot side to side.

Remove the two bolts holding the reservoir bracket shown with arrows if equipped..

Remove the lower bolt holding the reservoir bracket in place.

Squeeze the ears on the hose clamp shown with the arrow, and slide it upwards on the hose.

Disconnect the hose from the last step.

Move the hose assembly to the right of the supercharger as shown.

Disconnect the hose going to the PCV valve. This is the forward most connection at this location shown with a red arrow.

Slide the fuel hose shown off of the clamp to gain more clearance.

Remove the 10 bolts holding the supercharger to the manifold. The locations of these bolts are shown in the Torque Diagram at the back of this manual.

Remove the bolt holding the ventilation hose assembly shown with an arrow.

Install a lift bracket across two bolts shown to extract the supercharger. If you are not able to acquire a lift bracket, and engine hoist, you will need some help lifting the supercharger up, and it will have to be supported by some wood. Be extremely careful not to drop anything down into the intake ports. Also do not damage the sealing surfaces of the intake ports.

Remove the four bolts shown with arrows on the nose cover.

Remove the bolt shown with the arrow on the underside of the nose cover.

Attain the following “crows foot” pry bar. The dimensions are given in the photo.

You may have to work your way around the inside of the coupler to avoid binding.

Here you can see the hub surface after the coupler has been removed. Clean this area with a dry rag prior to assembly.

If the coupler is attached to the hub on the nose cover you will have to first pry it out with a small prybar or screwdriver.

Once you have pried the coupler out far enough you will be able to use the crows foot pry bar to remove the coupler completely. Check both O-rings on the nose cover (shown with red arrows) to ensure that they aren’t damaged.
Replace if necessary. Also check and clean all sealing surfaces on the supercharger prior to reinstalling.

Apply a light coat of lithium grease to all 6 small holes in the coupler using a cotton swab prior to installation. When installing on the hub pins make sure to do so on the larger chamfered side (shown with red arrows).

Press the coupler onto the nose cover hub by hand. Do not hammer the coupler on as it could damage the bearings. The remaining three holes should have the large chamfers facing outwards as shown with the arrows, and the pins should be protruding.

Ensure that the coupler is flush against the hub. Check both O-rings on the nose cover to ensure that they aren’t damaged. Replace if necessary. Also check and clean all sealing surfaces on the supercharger prior to reinstalling.

Reinstall the nose cover to the blower. You will have to line up the 3 open holes on the coupler with the hub pins on the housing side as you push the nose cover on. Make sure the nose cover presses on completely prior to installing the
6 mounting bolts. The OE M8x45mm bolt goes in the blue arrow location. The M8x25mm bolts are at the red arrow locations. If you have a notch in your nose cover housing near the green arrow location a M8x25mm bolt with an Allen head will go there otherwise this bolt will be the same as the red bolt locations. Torque all 6 bolts to 18 ft-lbs using a criss-cross pattern.

Install the OE bolts and nuts to secure the supercharger in place. Use a telescoping magnet (shown with a yellow arrow) to drop the bolts in place.

Slide the fuel hose back into the retainer clip shown.

Connect the vent hose back to the valve cover (shown with a red arrow) and secure with OE clamp.

Install the lower mounting bolt for the reservoir bracket. Torque this bolt to 108 in-lbs.

Install the two upper mounting bolts for the reservoir bracket if equipped. Torque the M6 bolt to 108 in-lbs, and the M8 bolt to 18 ft-lbs.

Install the bolt holding the ventilation hose at the location shown with the arrow. Torque this bolt to 108 in-lbs.

Install the bolt holding the ventilation hose at the nose cover (shown with the arrow). Torque this bolt to 18 ft-lbs.

Make sure the 4 bolts holding the fuel rails are tight if you haven’t already done so. Torque these bolts to 15 ft-lbs.

Mount the throttle body and secure it in place with the 4 OE bolts. Torque to 108 in-lbs.

Install the air duct and tighten the two hose clamps shown with arrows.

Release the tension on the belt tensioner and place the belt back in it’s original location. There is a belt routing diagram at the back of this manual.

You may need some help to locate the belt on the supercharger pulley while you have the tensioner released.

Check all your connections, and fl uid levels uid levels prior to starting the engine. Also check for any tools that may have been left in the engine bay. Start the engine and check for any leaks. Listen for any unusual noises while the engine is idling. You have successfully replaced your supercharger coupler.

Use only premium gasoline fuel, 91 octane or better

9 thoughts on “How to replace the coupler on a TRD/Magnuson Supercharger for the 5.7L Toyota Tundra”