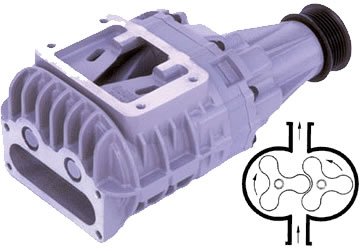 Welcome to part 2 of “Superchargers A-Z”. If you haven’t already read part 1, of this series, you may want to start there.

Some of you may have recognized in part 1 of this series that in the early days of supercharging, there are three types of superchargers – roots, twin-screw, and centrifugal. You may already be familiar with these buzz-words, but most people don’t understand how each technology differs. Before buying a supercharger, you should familiarize yourself with how each type of supercharger works. Each has its own set of advantages and disadvantages that may make it ideal – or not – for your performance needs. Today we take a technical look at the technology behind each type of  supercharger.

First lets begin with some basics. There are many components that go into making a complete supercharger system – mounting brackets, ignition controller, fuel pump, etc. In this article we look at only one component of a supercharger system – the supercharger itself (sometimes called a “head unit”, “compressor”, or “blower”). All superchargers, except turbochargers, are driven via a pulley that is connected either to the engine’s accessory belt, or to its own belt that goes directly to a crank pulley. This is where the similarities between the different supercharger technologies end.

Because the compression is done inside the supercharger, this design produces less heat than a roots supercharger – in fact, it is almost as thermally efficient as a centrifugal design. Like the roots design, the twin-screw is a fixed displacement supercharger (meaning that it pumps a fixed volume of air per revolution), and because the tolerances between the rotating screws are very tight, its ability to create boost at low rpms is unparalleled. These characteristics make it ideal for trucks and towing vehicles, where low to mid range power is primary in importance. Another important advantage of the twin screw compressor is its reliability. Unlike a roots supercharger, the rotors in a twin screw supercharger do not actually touch, so there are virtually no wearing parts. For this reason, twin screw compressors are commonly used to pressurize cabins in passenger aircraft. Like roots superchargers, twin screw superchargers are self lubricated and do not tap into the engine’s oil supply.

One disadvantage of the twin screw design is that, because it has an internal compression ratio, the twin screw is compressing air even when it is not sending boost to the engine (i.e. under cruising or deceleration). An internal bypass valve releases the pressurized air, but because it takes work to pressurize the air in the first place, the twin screw supercharger draws more power from the engine than while not under boost. Like the roots, the throttle body must be placed before the compressor because it is a fixed displacement supercharger.

The centrifugal supercharger enjoys several advantageous characteristics that make it the most popular supercharger design in the aftermarket world. First, it is simple and reliable because it has very few moving parts – just a few gears and the impeller. Second, the centrifugal supercharger produces very little heat because of its internal compression ratio. It is also small in size and very versatile because it can “free-wheel” and allow the engine to suck air through it or even flow air backwards. For this reason it can be placed anywhere in the intake tract – it can even “blow through” the throttle body, meaning it can be mounted nearly anywhere. It is also the most thermally efficient supercharger, meaning that it produces the lowest discharge temperature.

The Turbocharger
You may be wondering where the turbocharger fits in to this equation. Technically, a turbocharger IS a type of supercharger – one that is driven by exhaust gasses rather than from a pulley that draws power from the engine’s crank. Because we have covered this topic in depth in our Turbos vs. Superchargers article, we will not re-examine the differences again here. Because the turbocharger relies on a technology substantially different from the three traditional supercharger technologies discussed above, it is beyond the scope of this article.

That’s it for part 2 of the series – next time we’ll pull everything together and discuss what goes into making a complete supercharger system, and how the supercharger works in conjunction with the engine.