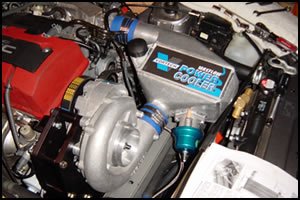 We are posting this article to help set the record straight about Vortech Engineering’s aftercoolers. Yes, Vortech utilizes a new style air-to-water aftercooler that many people think only work well for drag racing – but they are wrong. Vortech’s aftercooler includes a air-cooled radiator that cools the water via air passing through the front grill, meaning it stays cool regardless of how long you drive. For greater efficiency, pack it with ice before you race, but if you’re just planning to hammer down around town, it will work just as well (actually, we think they work substantially BETTER) on the street than more traditional air to air intercoolers.

An aftercooler is a heat exchanger placed between the compressor and the engine’s inlet. Vortech uses the term “aftercooler” as we feel it is more accurate; it is “after” the compressor. “Intercooler” means a heat exchanger placed between two compressors in a multi-stage system, but has been used as a synonym for an aftercooler ever since it was incorrectly stuck on the backend of a Volvo in about 1981. Aftercoolers and intercoolers are both also called charge coolers.

The earliest aftercoolers appeared on supercharged race cars shortly after the turn of the century. They took the form of fins placed on the exterior of the discharge ducts which extended into the air stream. Both aftercoolers and intercoolers were used with great success on WWII aircraft. This was the golden era of supercharging. More advances were made on superchargers and on charge cooling systems at this time than at any other time since. During this time, the two stage centrifugal supercharged, air-to-water aftercooled Rolls Royce Merlin engines were paired with the P51 Mustang to produce the most impressive piston engine fighter aircraft in history.

Vortech’s engineering staff has years of experience with charge cooler designs for many types for supercharged and turbocharged applications such as automobiles, boats and aircraft. In 1992, Vortech engineers evaluated using an air-to-air aftercooler with a Vortech V-1 supercharged 5.0 Ford Mustang. Multiple configurations were tried, all with similar results: the expected performance improvements from cooling the charge air were just not realized due to the significant frictional losses in the charge pressure. We felt that improving supercharger efficiency was more important, and with improved efficiency, an aftercooler was unnecessary with the lower boost levels popular at that time.

For heat exchanger design purposes, the gases in air are classified as a low-density fluid. Air going through a supercharger is called “charge air”. A supercharger compresses the charge air before it enters the engine. The act of compression both increases the energy and density of the charge air, but this act also generates a proportionate amount of heat. Heating is undesirable, as it tends to decrease the density of the charge air. One way to deal with heating is to cool the charge air after it leaves the supercharger and before it enters the engine. However, in designing the charge cooling system, which is, as we know, an aftercooler and not an intercooler, you should try to cool the air without losing the increased density through “frictional losses”. Frictional losses means the pressure drop which is naturally caused by running the compressed air through ducting and twists and turns and lengths of tubes. In fact, frictional losses caused by using a cooling mechanism can be so great that there can actually be a net loss in air density. That means if the cooling mechanism is not designed right, you start at 10 lbs, run through twists and turns and lengths losing 4 lbs, and end up at 6. So what’s the point? It’s almost not possible to compensate for that sort of bad design.

Therefore, the designer must consider both the heat transfer rate and the frictional losses for any system under consideration. This is called the friction-power expenditure. The friction-power expenditure increases with flow velocity as much as the cube of the velocity and never less than the square. Math aside, the impact of this equation is more clearly stated in the 1998 revision of the seminal heat exchanger design book, Compact Heat Exchangers:

However, for low-density fluids such as gases, it is very easy to expend as much mechanical energy in overcoming friction power as is transferred as heat. And it should be remembered that in most thermal power systems mechanical energy is worth 4 to 10 times as much as its equivalent in heat.

Vortech’s primary design goal is to limit frictional losses and pressure drop through the aftercooler to an absolute minimum. For this, Vortech chose the intrinsic benefits of an air-to-water system. At temperatures consistent with aftercoolers used in automobiles, water is about nine times more conductive than air. (Think about a hot frying pan. If you want it to cool quickly, do you dunk it in water or do you wave it around in the air? Which method cools faster?…) The more conductive nature of water over air allows both a smaller design of the cooling mechanism and a more effective design. The flow path length through the aftercooler core can be a fraction of that of an air-to-air core with the same cooling capabilities. Therefore extensive additional ducting to run the charge air out to an external air source and back to the engine are not needed and therefore associated frictional losses are almost eliminated. We bring the “cool” to the charge air, not the charge air to the “cool”. Remember that in these cases, just cooling the charge won’t matter much if you are losing a lot of the charge through frictional losses and pressure drop.

In an air-to-air aftercooler system, the charge air at the supercharger discharge is ducted to a heat exchanger assembly, cooled, and then continues on to the engine inlet. The heat exchanger assembly must be placed where the outside cooling air passes through it. The cooling possible is dictated by the heat exchanger design and size, and the flow and temperature of the air passing through it. You also need to take into consideration the boost loss, packaging within the vehicle, interaction with other cooling systems, and convection heating of the system. Air-to-air systems have little significant thermal transition. This means that the relatively low mass of the heat exchanger system heats and cools almost instantly and the system relies on its effectiveness for any benefits.

In a typical supercharged automobile, boost is made at wide open throttle (“WOT”), and boost makes heat. Most cars use boost intermittently and the engine is running in vacuum most of the time. (How often and how long can you drive your car at WOT?) Therefore most of the time, a supercharger is generating little heat. In this typical mode of operation, with an air-to-water system there is continuously cooled water stored in the reservoir since there is virtually no heating from the charge air. When the engine is used under boost conditions, the heated charge air will begin to exchange heat into the water. That heat in the water is then exchanged from the water to the air in the “radiator”. Depending upon the system and reservoir capacity, boost level and duration of the acceleration, there may be very little impact of boost on the total system temperature.

Continuous use at WOT over an extended time would have to take place for the system to “stabilize”, which means that the reservoir and radiator water are as hot as the charge air. Then, the system would be dependent solely on the effectiveness of the heat exchanger radiator removing the heat. These conditions rarely occur. In-house testing shows the Vortech Max Flow® air-to-water system operating at a continuous 8 p.s.i.g. boost pressure would require approximately 18 to 20 minutes to stabilize.

Even stabilized, the air-to-water aftercooler system can deliver superior overall performance due to the minimizing of boost loss intrinsic with the design approach. This system is intended to employ thermal transitions as part of the design criteria and delivers significant cooling with minimal frictional losses.

For sustained wide open throttle use, more cooling may be desired. Vortech recommends the use of a second or larger “radiator” heat exchanger for road racing or top speed competitions. Some salt flat streamliner speed record cars use no “radiator” heat exchanger at all. Instead, they successfully depend totally on thermal transition by installing a very large coolant reservoir.

•Better charge cooling– up to 80% effective (water only)

•The supercharger does not have to work as hard to overcome boost loss. This means that the supercharger will be making less heat in the first place and consume less power doing it.

•Allows the use of ice for added charge cooling for drag racing. Cooling below ambient temperature is possible.

For street systems, these benefits allow our designers to place the more compact aftercooler in an optimum position in the intake tract with virtually no additional ducting. For racing applications, Vortech has been using this technology with unprecedented success. The air-to-water approach has more benefits. The aftercooler may be placed to provide evenly distributed, homogenous, air directly to the intake manifold’s plenum feeding the inlet tuned runners as seen in or Mondo (Igloo) Race Cooler® (patent pending). This also avoids pressure losses associated with the re-convergence of the flow after the cooler as with inline coolers. The Igloo as used by the fastest centrifugally supercharged and turbocharged cars in the country, depends entirely upon thermal transition. It employs ice water supplied from a separate tank with no “radiator”.