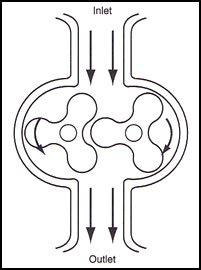 The big disadvantage to the roots type supercharger is its thermal inefficiency – or its nature to produce high discharge temperatures – which robs power from the engine. With a roots type supercharger, an intercooler is almost always a necessity to bring the air charge temperatures down to an acceptable level. This poor thermal efficiency can be attributed to the fact that it has no internal compression (compression is done after the air leaves the discharge port). Additional heat is created by compressed (hot) air that leaks backwards past the rotors and heats up the temperature of the inlet charge.