The twin-screw supercharger was originally invented in the 1930’s by Mr. Alf Lysholm who was then Chief Engineer of SRM (Svenska Rotor Maskiner AB). The twin-screw design was developed to fill the tremendous voids the centrifugal, turbo and roots superchargers have. This concept was intended to meet the requirements of a high average efficiency under most varied conditions of pressure and speed, a high maximum efficiency – preferable above 85% – with small bulk, low weight and also suitable for direct drive. This concept lead to the development of the twin-screw supercharger which was compact and light, had a very high efficiency over almost all varied conditions of pressure and speed, and an incredibly high maximum efficiency. This concept became a reality in the late 1930’s and early 1940’s when the Lysholm twin-screw supercharger was produced. Because of high building cost, the screw compressor did not find its way to OEM use on internal combustion engines, but industrial applications for air compressors, refrigeration and air-conditioning.

With technology ever increasing, the screw-type compressors price to manufacture has come down to a competitive level for the internal combustion engines and is distributed throughout North America by Whipple Industries. Art Whipple of Whipple Industries quickly made use of the major benefits of the screw compressor by placing it on the throttle body injected GM 350ci. The results were outstanding, no more turbo lag, no more hot air, just pure power. Since that time, the Whipple Charger has become a household name throughout the performance community for providing the most technologically advanced supercharger kits on the market.
The Whipple Charger creates boost instantly, which gives any motor an instant boost of power. It doesn’t matter whether your towing, cruising, or racing, the Whipple Charger gives you the power when it’s needed. Because of the Whipple Chargers instant boost, you’ll achieve more power throughout the rpm range than any other supercharging method.

The Concept of Supercharging

Supercharging of internal combustion engines has been used for many years as a method to improve engine performance and efficiency. Entering the millennium, a new trend is appearing. The trend points to small displacement engines in order to meet federal emission legislation on fuel consumption and emission control. The driver, however, still demands the same performance they’re used to. 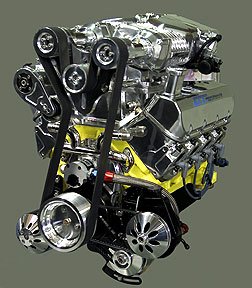 A good way to meet these needs is supercharging otherwise known as forced induction. The purpose of supercharging an engine is to raise the density of the air charge, before it’s delivered to the cylinders. Thus, the increased mass of air trapped and then compressed in each cylinder during each induction and compression stroke makes more oxygen available for combustion than the conventional method of drawing the fresh air charge into the cylinder (naturally aspirated). Consequently, more air and fuel per cycle will be forced into the cylinder, and this can be efficiently burnt during the combustion process to raise the engine power output to higher than would otherwise be possible.

In automotive and marine applications, the pressure-wave supercharger is rarely used. The turbo and roots-type superchargers have been the most popular forced induction methods in the past. While the turbo creates great peak horsepower, turbo lag and high cold start emissions due to the thermal mass are severe drawbacks of the turbocharger. Small displacement engines need higher-pressure ratios to achieve the performance demanded by the driver. This fact increases the mentioned drawbacks of the turbo and makes the turbocharger a less desirable alternative for supercharging than the mechanical twin-screw supercharger. The Whipple twin-screw charger does not have the usual drawbacks of earlier mechanical superchargers such as the roots-type, such as poor efficiency especially at high-pressure ratios, high rpm, high noise level as well as high price. Comparative tests, made independently by Whipple Industries, show that the twin-screw compressor is the most effective supercharging method available.

Inlet Phase – The male and female rotor’s rotate counter to each other. As the lobes of each rotor travel past each inlet port, air is trapped between consecutive lobes and the cylindrical casing. The air moves axially (forward) throughout the case towards the discharge port.

Compression Phase – Once each trailing lobe seals its cell, the air charge is swept around the casing until the leading lobe uncovers the discharge port. At the same time, the male and female lobes will intermesh in such a way so that the volume formed between them, and the apex where the twin cylindrical walls meet, is progressively reduced in an axial direction from the inlet port end to the opposite discharge port end.

Discharge Phase – Once equalization of pressure between the existing charge in the manifold and the charge being moved into the discharge port occurs, then any further rotation of the rotors displaces the charge positively into the manifold until the volume between the intermeshing rotors and casing walls in the discharge port region are reduced to ambient pressure again.

2 thoughts on “Screw-Type Supercharging 101: An Intro to Whipple”