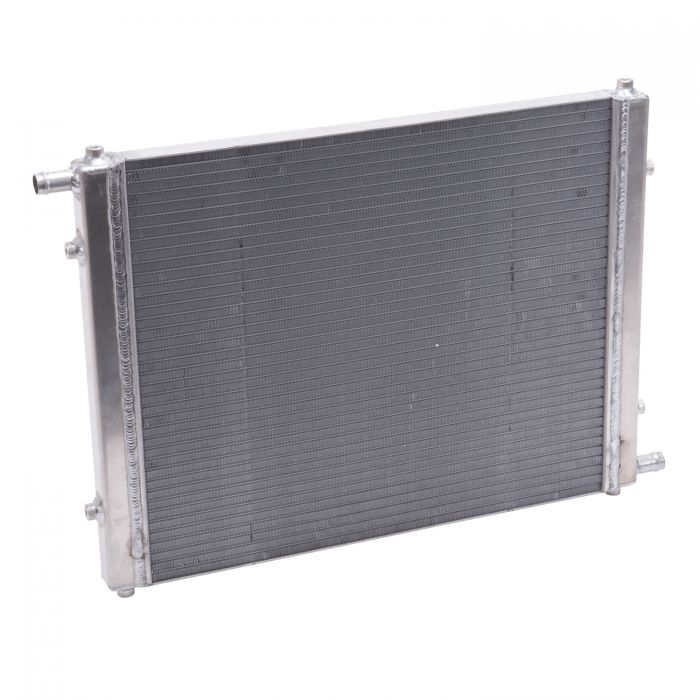 An intercooler (sometimes referred to as an aftercooler) is designed to remove heat from the compressed air coming from the supercharger (or turbo) before it enters the engine’s induction system. An intercooler works just like a radiator – air is cooled by fins, bars, louvres, and plates inside the intercooler that are cooler than the compressed air coming from the supercharger. The reduction in air temperature increases the density of the air (more air molecules per cubic foot), which consequently increases your engine’s ability to make more horsepower and torque. The decreased air temperature allows you to run more boost on a given octane of fuel before detonation occurs..

The term ‘intercooler’ comes from days when they were first used on twin turbo aircraft engines. With two turbos, the air charge would get VERY hot – it was heated by the first turbo, then heated again by the second turbo. To combat this double temperature rise they placed a heat exchanger in between the two turbos and called it an “intercooler” because of its location in between two turbos. When this same kind of heat exchanger is used on a single turbo or supercharger, it is located after the supercharger, and should technically be called an “aftercooler” because of its location after the single turbo or supercharger. These terms didn’t seem to stick, though. The term ‘intercooler’ caught on and became almost universal for all heat exchangers regardless of their position. The term ‘aftercooler’ became synonymous with air-to-water coolers because this is the term Vortech uses to describe their coolers, which are water cooled. So while technically incorrect, we will still use the popular terms ‘intercooler’ to mean any air cooled charge cooler and ‘aftercooler’ to mean any water-cooled charge cooler.

There are several important benefits to intercooling that have resulted in their increased popularity in recent years. The most significant advantage is that intercooling increases the detonation threshold because of the cooler air charge, meaning you can run more ignition advance for higher performance, or run lower octane fuel before experiencing detonation. This makes intercoolers very desirable for those looking to get the most out of their street vehicles on pump gasoline.

The cooler air also allows your engine to run slightly cooler, reducing the
chances of overheating. Intercoolers also enable your engine to produce more horsepower because of the denser air charge being delivered to the engine’s combustion chamber.

Don’t assume, however, that you can simply bolt an intercooler on to your supercharged engine and expect power gains with no other changes to the system. Intercoolers do create some internal drag causing a slight reduction in boost, and can also cause the engine to run lean (knock) due to the denser air charge. These problems are easily corrected and should not cause concern, however they cannot be ignored.

In order for an intercooler to effectively cool the air that passes through it,
the intercooler itself must be cooled by some external means. Most intercoolers are cooled just like your engine’s radiator – air flows over the outside of the intercooler’s fins, which in turn cool the air inside the intercooler – hence the name Air to Air Intercooler. Some intercoolers, however, are cooled by water instead of air, in which case they are generally called aftercoolers, or Air to Water Intercoolers. The benefit to an aftercooler is that air passing through it can be cooled more than in a traditional air/air intercooler if very cold water and ice are used to cool the intercooler – in fact, some aftercoolers chill the air to below ambient air temperatures even after it has been compressed by the supercharger. The reason aftercoolers are more effective in cooling the air charge is because water is a much better conductor of heat than air – in fact water conducts 4 times as much heat as air! The obvious drawback is that with time, the water will heat up to the temperature of the air passing through it, and its ability to cool incoming air goes away. Some aftercoolers, however, use a small radiator to cool the water that runs through the system, making
them ideal for street use as well as racing. For drag racing applications aftercoolers packed with ice work very well because they only need to work for around ten seconds or so (hopefully) before you shut down and head to the victory podium.

For milder racing and street applications air/air intercoolers or aftercoolers
with radiators are more practical as their ability to cool incoming air is not
reduced with time.

When is it right to intercool?

Obviously, intercoolers only work with supercharged or turbocharged vehicles where there is a substantial difference in temperature between the air entering the engine and the cooling medium (the intercooler). Because superchargers heat up the air significantly as they compress it, it is possible for there to be a very large temperature difference between the intercooler (ambient air temperature – 80F degrees or so) and the compressed air (200F – 350F degrees). Superchargers with higher boost will create a hotter discharge, so as you increase your boost, the effects of the intercooler become more and more noticeable. In general we would not recommend intercoolers on supercharged engines with less than 8-9psi of boost, as the benefits will not be substantial. Essentially, run an intercooler when only when you running peak boost (i.e. any more boost would cause detonation) for the octane of fuel you use. Intercoolers work well in both warm and cool
climates and work exceptionally well on marine applications because of the easy access to cold water.

Don’t intercoolers restrict the flow of air into the engine?

Yes. Any time there is an obstacle in the way of the air flowing into the engine (like an intercooler fin or louvre), a pressure loss will result. Today’s intercoolers are very effective in minimizing this pressure loss so that the benefits obtained by cooling the discharge temperature normally outweigh the 1-2psi (approximate) loss in air pressure, which can be regained by running a smaller pulley and increasing the output of the supercharger.

For specific information about Intercooler system upgrades, start with our Parts page and filter by Intercoolers.